+Natural is a popular serialized manga created by Aiko Iwase and Eiji Niizuma. Because of its popularity, it became an Anime. After Hattori received the final script from Iwase. he suggested to Yujiro that they let Eiji draw it, because it would get Muto Ashirogi fired up to beat it. Eiji was happy to draw the series, and said that he liked the story a lot and that he could handle drawing two series at once. In Chapter 134 Eiji has mentioned that +Natural's story is getting boring, evidenced by its decrease to 15th place. In Chapter 149, Miura reveals that +Natural has moved from 16th place to 9th place. It's because of this popularity boost that it is featured on the Jump cover that Eiji's new series, Zombie Gun, was featured in.

A boy discovers he can bend spoons after watching a television program on psychic powers. He then finds he can move small objects with his mind, and everything he tries works out. He forces a chicken egg to hatch, however what hatches is neither human nor monster. The people with these abilities are referred to as a Psycholife.

The series once had a crossover with Eiji Niizuma's other Manga series Crow. 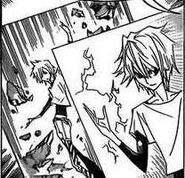 A (most likely main) character from the show 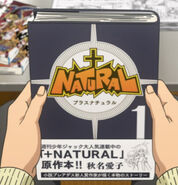 A page from the first volume. 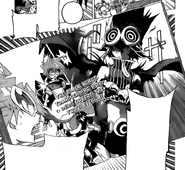 The main character vs a villain

Aiko as the main character
Community content is available under CC-BY-SA unless otherwise noted.
Advertisement