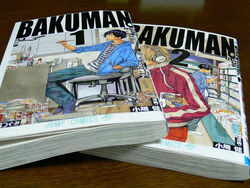 Bakuman, stylized as Bakuman。 (バクマン。), is a shōnen manga written by Tsugumi Ohba and drawn by Takeshi Obata, who also worked together on the popular manga Death Note. The series follows talented artist Moritaka Mashiro and aspiring writer Akito Takagi, two ninth grade boys who wish to become mangaka. The first chapter was released in Japan on August 11, 2008 serialized in the magazine Weekly Shōnen Jump. The first volume was released on January 5, 2009 and final volume released on July 4, 2012. It is the first manga released online by Shueisha in multiple languages before becoming available in print outside of Japan. At San Diego Comic-Con International 2009, Viz Media announced they had licensed the series for their Shonen Jump imprint...
Read more >

165. Practicing and Charging Up

Ashirogi Muto is exstatic about the anime adaption of Reversi, but also find out that Azuki's role in the anime isn't a given, there will be auditions. Hattori tells them not to tell anyone that Reversi will get an anime, but Mashiro tells Azuki anyway, who phones Mashiro right away. Their share a mutual emotional moment, where Mashiro is convinced by Azuki's talent to get the role. Meanwhile, Ishizawa is on the verge of finding out that Mashiro and Azuki are dating and that means trouble... ! (Read Bereisgreat's blog on the new chapter) 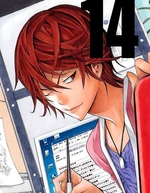