Crow (クロウ, Kurou) is an ongoing manga and anime series written and illustrated by Eiji Niizuma. It is a fantasy battle manga and very popular, usually ranking highly in the Jump ratings. Crow ended in chapter 140 of Bakuman.

The main protagonist of the series, Crow, appears to have a pet crow on his shoulder and his blade is a very large crow's feather. He has a black and white striped wristband on his left arm. He has crow gloves on both hands and sharp talons. He wears headgear with goggles on it. His hair is red/black and his eyes are red. The white zipper on his shirt is also a feather. He also has some unknown supernatural power. Crow may also be a normal boy as shown in a manuscript it shows a boy looking at a crow in a cage and the page behind it shows Crow.

The chapter that appeared in the 24th issue of Shonen Jump, with no text and Eiji told the story through pictures. He redid this chapter immediately after seeing chapter 8 of PCP when Mashiro Moritaka changed his drawing style. According Mashiro he did this to show Mashiro, even if it meant slipping in the ratings a little.

The series' characters all gather together to fight a final opponent. This manages to hold Crow at the top of the manga rankings for fourteen consecutive weeks. 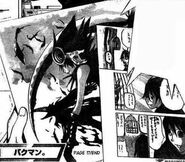 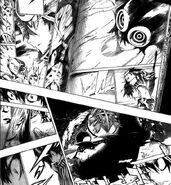 Add a photo to this gallery

Retrieved from "https://bakuman.fandom.com/wiki/Crow?oldid=7861"
Community content is available under CC-BY-SA unless otherwise noted.