Just like how cell phones use infrared rays to transmit data, in the future, people's brains can be transferred much the same way. Of course smart people's minds are expensive but they are the most desirable. In order to get money, you will have to sell your own to as many as possible. If you sell to the wrong person, then they will get ahead of you so you should try to sell to the stupidest people and buy from the smartest. There is a rule that you cannot buy from third parties and only the original owner.

They mix elements from a previous series, 100,000,000 Minutes, with a computer ranking system and at one point the protagonist has the lowest rank of 6,908,002.

The protagonist from Money and Intelligence 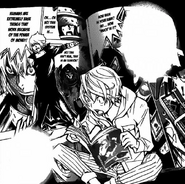 When Money and Intelligence was going to be published in Akamaru Jump, Hattori told Ashirogi Muto that the editors were using them to make Niizuma Eiji look better because Eiji has his 50 page series with coloured opening pages in it starting that week and because they are around the same age, but that this is still their big chance to beat Niizuma and that "You have to beat him!, You can't lose!!" When it was published, on the cover page of Akamaru Jump, it called Ashirogi Muto a "talented 15-year-old". After reading their chapter and then Crow, Tagaki thinks that Crow is better while Mashiro thinks that theirs is. Hattori agrees with Mashiro and says that he thinks they won. The early results reveal that they are in first place ahead of Niizuma by 2 votes only with them having 33 and him having 31. In the final result they came in third place losing to Niizuma in first with 503 votes, some unknown manga in second with 312 and theirs in third with 308. They lost votes because of younger and female readers. They then decide to do mainstream.

Eventually, in order to come up with something to beat Niizuma Eiji's manga, Mashiro and Takagi add "Appearance" to the title, making the manga, "Money, Intelligence, and Appearance", abbreviated as "KTM".

Community content is available under CC-BY-SA unless otherwise noted.