View source
watch 01:36
We're Getting Mutants in the MCU - The Loop
Do you like this video?
Play Sound

Perfect Crime Party, commonly known by the anacronym PCP, is Ashirogi Muto's third manga. It was first serialized in Weekly Shōnen Jump, but was transferred to Hisshō Jump after the beginning of Ashirogi Muto's new manga, Reversi. At the end of the series, this is the only manga Muto Ashirogi has in Jump with Reversi ended previously.

Perfect Crime Party is about three elementary school children who decide to form a Perfect Crime Club, performing seamless acts of crime. At the beginning of the series, their crimes are simple as putting a dirty tray on the desk of a boy that already took returned his tray without being caught, or switching seemingly identical items. The plot follows the group's efforts to commit perfect crimes within their school.

There are three main characters:

Makoto Doumoto is the main protagonist of PCP. He looks like a normal kid with black medium-length hair, but when in Perfect Crime Mode he has his hair behind his ears and wears glasses. He also has a special cellphone strap that has tools which he uses. He was modeled after Mashiro.

Minoru Takunaga is the second protagonist of PCP. He proposed to Makoto that the two of them start the Pefect Crime Club. This is in a similar manner to how Takagi asked Mashiro to draw a manga with him. He was modeled after Takagi.

Mai Annojyou is the last addition to the Perfect Crime Club and the only female member. This character is modeled after Miho Azuki, who was the voice for her in the drama CD.

Akechi is PCP's first major antagonist and rival. He's a smart new student with good deductive skills who announces he will figure out their identities. He is defeated by their perfect crime, and thanks them for the "party" they gave him. He bears a physical resemblance to JUMP's head editor, Sasaki, and his role in the manga mirrors the chief editor's role in the Bakuman mangaverse, such as his introduction and defeat leading to his rivalry with PCP coinciding with Sasaki's doubt of PCP's success, and his disparagement of the copycat crime as Sasaki's defense of PCP's integrity. He wondered what the second P in PCP stood for, but had enough deductive skills to figure out "Perfect Crime."

Sigma is an enigmatic figure who assists PCP from time to time. The chapter competing with Crow involves PCP attempting to figure out Sigma's identity. Ashirogi Muto has considered Sigma as the basis for an anti-hero of their next manga.

Due to its success, PCP was adapted into a Drama CD and into a novelization quickly after the start of serialization. However, due to the fact that it can be easily imitated by children, PCP is unlikely have an anime adaptation. Despite the fact that it has no anime, PCP is considered a popular series that consistently manages to get into the top 5 in rankings.

Before using the name Perfect Crime Party the manga was named Perfect Crime Club, however they change the name because there was already a movie with the same name.

This manga is their last chance in Weekly Shōnen Jump, with the added stipulation that to get and stay serialized they had to beat Niizuma Eiji. When the voting for the manga began the editor in chief, Sasaki, proposed that they should vote if the manga would be able to win or lose against +Natural and Crow. The vote resulted in 4 no's and 3 yes. However, the editors in the meeting thought that it would be a shame if they lost Ashirogi Muto's talents to another magazine. Given how good Perfect Crime Party was, they wanted to give Ashirogi Muto a chance so all but the chief editor changed his vote to a yes. The manga was first published in Weekly Shonen Jump in Page 91, where it debuted first in the reader surveys.

Perfect Crime Party has been considered for an anime, however there were concerns by both the editor-in-chief that it was too soon, as well as from parents who felt that the manga was a bad influence on kids since it was so realistic that it was possible for kids to emulate. Currently the manga is not being considered for an anime, which has led Takagi and Mashiro to consider ways of creating another manga that is more suitable for being made into an anime even as Perfect Crime Party is still ongoing, but they do wish to keep working diligently on PCP, keeping the ratings as high as they can. 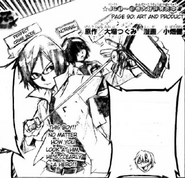 Turns down the offer to know who PCP is; the easy way

PCP give a consolation prize to their nemesis

Community content is available under CC-BY-SA unless otherwise noted.
Advertisement