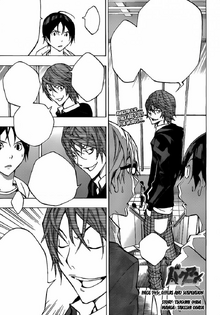 Yo! I'm back with yet another chapter. I'm not really feeling well today and I really don't feel like writing a blog about this chapter, but I guess I have to...

On to the chapter! I kinda liked it. Like I said above, in my current state I don't feel like going too much into it, but yeah. Absolutely no humor (except Hattori's epic face) in this and the last chapters, I really crave some humor right now in Bakuman, like in the old days. I really, really thought Nanamine's comparison with a film director was handy, it made his explanation a lot easier. Ashirogi Muto being the dogs of the Jump editors was a little too much… I mean, we have seen what an amazing editor Hattori is and without him, Ashirogi wouldn't have come as far as they are now. Recently, I had to agree with everything Nanamine said, because it all just make sense, but his attitude against editors is unforgivable. I personally like the editors and how they bring about the best out in a mangaka. I agree that some are just weaklings and kinda stupid (like Miura), but most of them are really cool. I guess that his opinion on that makes him even more of a villain. Damn you, Nanamine!

Azuma's flashback was really moving. I liked how we got a look in his past and especially Taro's past. I enjoyed that part, it had a lot of emotion in it. Also, Azuma standing in the rain at Taro's funeral… Just look at it. Look at it again. And again. Isn't that one marvelous piece of art?? Nah, really, his expression, the screen tone, the raindrops mixed with his tears, his awesome hair… I really like that panel. And Azuma finally got a little more character outline, and it came out well. I think it really suits him and I like him a little more than before.

On to the part with Nanamine and Yanagi. God damn, Nanamine, you're such an ASSHOLE!!! Even though Yanagi is ugly as hell, you don't have to be so mean. I hope Yanagi goes berserk like Nakai did. That would be a nice extra story. Now that I think about it, Yanagi and Nakai really are kind of similar.

Well, that's it for today. I'll see you next week, with another Bereisgreat review. Rate, comment and subscribe! xD