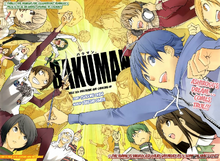 It's been a long time, right! Well, I'm finally back at the Bakuman Wiki, writing another post (not that anyone's interested but I enjoy it, so shut up!) on the latest chapter.

First things first, thanks you Red Hawk Scans for the marvelous release! I've never heard of that group, but you're doing a good job, so keep it up! Well, this chapter was rewarded with an awesome full colored cover page (both on the WSJ AND the real chapter). We have a little sneak peak at what the Reversi anime would look like, so that's awesome. The colored chapter cover page is what is to be expected by Takeshi Obata, stylish as usual. Plus, Azuki gets a little screen time in the beginning, being cute as always :3. I think it's really cute how she's practicing the lines even before she knew there was gonna be an anime of it, shows her trust and dedication to Saiko. And she has two copies of every PCP and Reversi volume. That's love man, that's love.

Then we have the usual blablabla by Hattori and Ashirogi Muto. Not that it's boring, but I don't wanna talk about it in this particular blog. It basically comes down to this: Azuki won't have a free ticket to becoming the seiyū of the heroine, but there'll be auditions. Bit of a bummer, but Saiko thinks that she'll make it anyway. We'll see.

An emotional scene with Shujin later, he's back at home and text Azuki in his usual matter, nervous and stretching his arm out like a moron. Hooray, Azuki gets more screentime! But why does she go outside to talk on the phone. Is the reception that bad in Azuki-land? After congratulating him, she goes right up to reciting every single line the heroine has in the first volume and later trough the second volume. Ooo-kay... Not exactly what I had in mind what to say when congratulating my love of getting an anime. But that seems to suit Saiko just fine. They say stupid attracts stupid (or am I the only one who says that?), so that's about right.

I liked the little scene of Reversi, looks a really interesting manga. If it were real, I'd read it for sure! Blablabla-lovey-dovey-stuff-blablabla-typical-Saiko-Shujin-conversation-blablabla-Azuki-kicking-ass-and-almost-luring-her-boss-into-sexual-harassement (or is it just me?).

And then comes the scene. Yes. The Scene. With a capital S. We see some fat-ass otaku, a typical Japanese shut-in and a neet. And whadda-ya-know, he's a hardcore troll. Didn't see that one coming. *cough-cough* Moving right along. It seems that he's a huge fan of that skank Ashirogi brought along to the Tezuka Award and it's about to come out that Saiko and Azuki are dating! Oh nooooo! Seriously, I really don't see the harm, somebody fill me in.