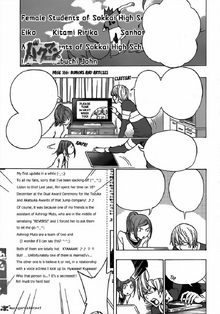 It starts off with Shujin quickly figuring out that Miho and Saiko's relation was in danger of being found out. I could understand Ishizawa being an otaku and finding that out, but that Shujin has knowledge in seiyū's, blogs and forums really surprised me. Also, how the hell can you find that particular forum that fast? The internet is huuuuge and Shujin can find it with just a few clicks. I've figured it out... SHUJIN IS AN OTAKU.

Eh, eventually, they contacted their assistant, who reached what's-her-name and got the post deleted. At first, I didn't quite get what the problem was with their relationship being found out (see my previous post), but Shujin's explanation made it clear to me and THAT'S BAD... I was thinking back then: "If this goes on, Azuki won't get to be the main heroine and everything will be ruined. Goddammit."

And then Ishizawa comes back in screen. I really didn't want to see that fatass (I'm not being offensive, I have quite a few big friends myself, but just look at Ishizawa and his personality: he's a fatass. He's like Cartman. Oh wait, I already used that joke) right now, and especially not what he was doing. What an ass! He's like a harcore troll, but instead of fooling or perhaps hurting anonymous people on the internet, he's actually destroying his former classmates' dream. Again, what an ass.

And owwwww... Saiko and Azuki's honesty and pureness keeps warming my heart. And even more that they said exactly the same thing :3. Even more random shit about the situation escalating, with that damn article that's gonna ruin everything. And it probably will...

I know, it ended on a sad note, but still: Happy Valentine's Day! I wish that your love life will be as pure and happy as Saiko and Azuki's. Or just sex. Choose wisely.

Retrieved from "https://bakuman.fandom.com/wiki/User_blog:Bereisgreat/166._Rumors_and_Articles?oldid=9120"
Community content is available under CC-BY-SA unless otherwise noted.