Edit
watch 01:36
We're Getting Mutants in the MCU - The Loop
Do you like this video?
Play Sound

Zombie Gun is a manga written and illustrated by Eiji Niizuma. It is a fantasy battle manga that received a record breaking 692 votes on its one-shot and 767 votes on its first chapter. It is first seen in Chapter 151.

The manga is about a zombie named Gun, who still has a human heart. Gun goes to seek revenge on the one who turned him into a zombie and to return to his human form. During Gun's quest, he falls in love with a human girl who supports him in his goal. Seen throughout Gun's quest will be the discord and fight between Gun and the people who hate zombies. Also depicted is his love for the human girl supporting him. Gun's entire family was killed and have turned into complete zombie's, including his twin brother Jin. Jin was killed in Chapter 5 by a mysterious man carrying a scythe claiming he took such action in order to show Gun that zombies can be killed.

Note: It's rather odd that Eiji would have his character fall in love; he failed prior due to not having been in love, which would have provide him with experience to draw from.

Gun - A zombie with a human heart who is attempting to get revenge on the one that turned him into a zombie. He is antagonized by the complete zombies who have no human heart. He loves a human girl, who supports him in his quest to become a living human again.

Jin - A complete zombie and the twin brother of Gun. He was very close to Gun before they became zombies, but now as a complete zombie he is evil and urges Gun to abandon his human heart to become a complete zombie. In Chapter 5, he meets his end at the hands of a man carrying a scythe claiming to be showing Gun that zombies can be killed.

Scythe Man - An unexplained antagonist that carries a scythe who killed Jin in order to show Gun that zombie's can be killed. Eiji created him in a genius move to beat Muto Ashorogi in the rankings. 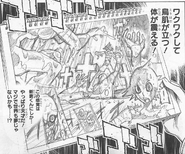 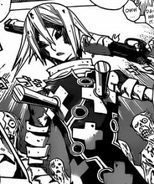 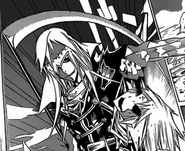